Two modular homes have been installed in Coventry as part of our modular housing pilot.

The homes were constructed in the Totally Modular factory in Cradley Heath, West Midlands, and were taken to the site at Littlethope, Willenhall.

Nick Byrne said he is very impressed by the finished homes.

He said: “It is great to see the finished product after following this journey over the last few months.

“The new homes look brilliant now they are complete and there are so many benefits to this method of building. This is the future of housing with build times dramatically reduced and time on site.

“We’re looking forward to seeing how we can use modular homes in the future.”

The homes have been built in partnership with Totally Modular and Coventry City Council. When they were transported to the site at Littlethorpe.

Managing Director at Totally Modular John Connolly said: “We’re thrilled to have finished the modular homes and installed them successfully at Littlethorpe.

“Up to 95% of the work on the homes is completed in the factory and when they are taken to the site they are lifted on to precision installed pads and once it has been hooked up to the mains, the keys are ready to be handed to the new tenant.

“Our engineers and tradesmen have been working incredibly hard in the factory to assemble the pre-fabricated steel structure, attach all the internal wall panels, complete the insulation and external finishing such as bricks.”

The properties will have many benefits for residents including reduced fuel bills as both eco and energy efficient technology such as solar PV, battery storage, air source heat pumps and an integrated mechanical ventilated heat recovery system will be installed leading to high thermal efficiency resulting in an excellent energy rating.

Deputy cabinet member for Housing and Communities at Coventry City council, David Welsh, said the homes are a great way to tackle the housing crisis in the area.

He said: “Currently we have a housing scarcity in Coventry and because these builds were created quickly, they could be a way to solve the housing crisis.

“The modular homes have so many positive points with lower impact on residents near the site and a quick completion. The scheme is something that should be considered in future elsewhere in Coventry.

“The completed houses look great and we hope that the new tenants enjoy living there.” 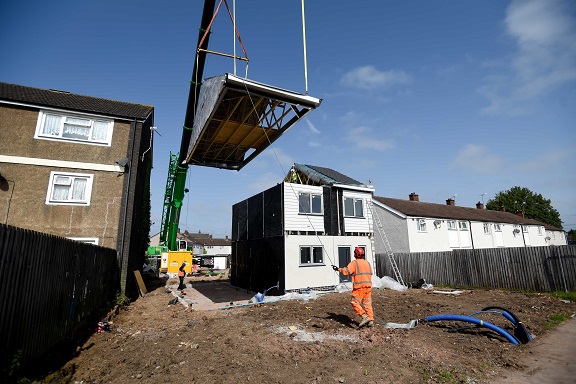