The Knife Angel statue made from collected blades is currently in Coventry and we donated money to help bring the statue to the city.

The £500 we gave helped contribute with relocation costs as the artwork goes on a tour of the UK.

The Knife Angel is built from more than 100,000 knives that have been collected from streets across Britain.

The British Ironwork Centre, based in Shropshire, sought permission from all 43 police forces in the UK to retrieve knives by opening knife banks to educate and raise awareness of the horrors of knife crime.

Relatives of people who had been killed by knife crime were then invited to engrave a message or name on the confiscated blades.

These blades were then incorporated into the 27 feet tall sculpture, created by artist Alfie Bradley.

She says: “This statue is so impressive and moving, with a key message that knife crime destroys lives.

“We have worked with other agencies in Coventry to tackle knife crime after recent increases, so it is great that we are involved in bringing the statue to Coventry.

“The artwork is so important as it demonstrates how life can be wasted and I hope it makes people reflect on why carrying a knife is so dangerous. The Knife Angel also strikes a chord emotionally as many of the knives have been engraved by families who have lost their loved ones.”

The statue was made under the campaign ‘Save a Life, Surrender your Knife’ and it exists to spearhead change and ensure there is a focus on early intervention, awareness raising and education in relation to knife crime throughout the UK.

Our Chief Operating Officer, Kate Still, adds: “We contributed £500 sponsorship to help with moving the Knife Angel into place at Coventry.

“We donated this as knife crime is a real issue for many of our communities and the sculpture helps to raise the profile of knife crime both nationally and locally.”

The Knife Angel is on display outside Coventry Cathedral until the end of Easter.

As part of its tour it is set to visit Birmingham although dates for this are yet to be announced. 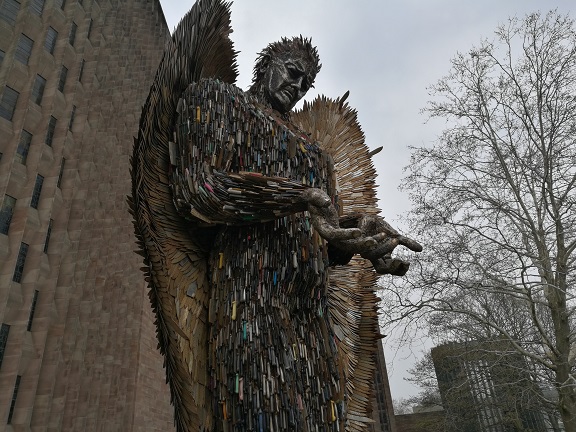