Residents from the Gateway and our Retirement Living schemes visited the National Memorial Arboretum in Staffordshire to help develop an art project to commemorate the 75th anniversary VE Day and VJ Day.

They were given a tour of the arboretum and took part in workshops.

Residents from the Gateway were able to take part in a two-hour clay making workshop where they sculpted and decorated tiles. They used a specific memory as their inspiration.

The Gateway is our primary facility for homeless people in Coventry and houses people from all backgrounds.

Our Retirement Living Scheme residents took part in a VE Day inspired tea party where they shared memories through a range of activities.

The result of both workshops will inspire and feed into the production of new artwork commemorating VE Day and VJ Day at the arboretum.

Ellen Gale, who lives at William Sheridan House, visited the arboretum. She was a teenager during the Second World War.

She said: “My most vivid memory of the Second World War would be the blitz in Coventry – the sky lit up and it was completely red. I have never seen anything like it in my life.

“It’s so special to come to the National Memorial Arboretum and be part of this art project.”

Robert Reason who lives at Stretton Lodge in Willenhall added: “I remember my dad worked with Avro Lancasters during the war and he had so many stories to tell me. He would always tell me about how he collected shrapnel to sell it and make pocket money.

“It’s great coming to the arboretum and help create this art project as it’s a really important time we need to remember.”

Joan Williams, who also lives at William Sheridan House, said: “I remember seeing a plane firing bullets out of the sky in Coventry while my brother and I were in the garden – it was terrifying.

“It has been emotional visiting the arboretum but it is important that we remember.”

The arboretum is a 150 acre site which is a tribute to those who have served and continue to serve our country.

Our Retirement Living Manager, Tim Ansell, said: “Our residents who travelled to the National Memorial Arboretum had a lovely day – it was great for them to talk about and share their experiences.

“It was a really important time in their lives and to help inspire artwork commemorating the 75th anniversary of VE day is a great experience for them.

“The trip was very poignant too, with many people remembering those who had fought in the Second World War.”

Homelessness Assistant Martin Hancox said: “This was a great opportunity for people from our Gateway accommodation.

“This information inspired his artwork on the day, and he made a clay poppy in tribute to his great uncle.

“The whole day has been a fantastic experience – our residents had huge smiles on their faces, and they were so grateful to visit the arboretum, many of them didn’t know it existed.”

It marks the 75th anniversary of VE Day and VJ Day.

The exhibition will be displayed in the Remembrance Centre.

Christopher Ansell Exhibits Officer from the National Memorial Arboretum added: “We’re so pleased people who had their own experiences during the Second World War are inspiring this art project to commemorate VE Day.

“It was a significant period in their lives and it’s fantastic that we are able to use real life experiences to shape our VE Day exhibition.

“Thank you so much to everyone who visited the arboretum and became a part if this project.” 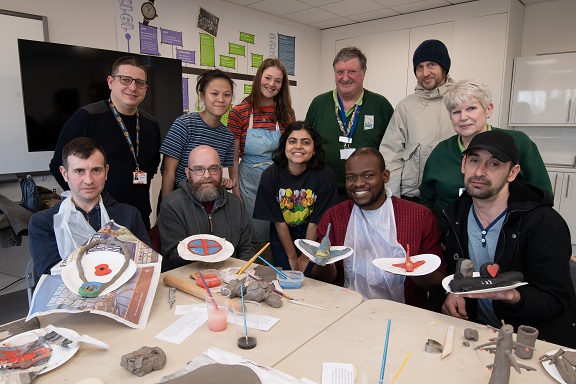