A street at our Spirit Quarters development in Coventry has been named after a respected member of the community.

John Barrett was involved in many community events, and now a street in Wood End has been named John Barrett Way.

John, who passed away suddenly in 2017, was a community advocate who played an active role in driving forward the regeneration of the area. He was involved with many BBQs and charity fundraising events as well as helping with jobs in the area such as mending chairs in the café, helping to put up gazebos, dressing up as Father Christmas for children and delivering the Spirit Quarters magazine.

John was also a family man and a father of five.

His wife, Janet, attended the ceremony to unveil the street sign in phase four of the development and it was lifted into place by members of his family.

Janet said: “It’s such an honour to have a road named after John – he deserves it for all his community work. I think I will find it quite emotional when I walk past the sign and think of him.

“John was involved with Citizen and the Moat House Trust and he delivered the Spirit Quarters Magazine for the last five years – because of this everyone knew him.

“He would get involved in everything, there wasn’t anything he couldn’t do or help with. He was a loveable, jolly guy and he never had any cross words.

“We have lived in Spirit Quarters for 41 years and John was over the moon when we were given the house at the development.”

The street sign has been put in place outside the new show home and sales office for the Spirit Quarters development near Milverton Road, which is opening Saturday, February 1.

The new road is part of phase four of Spirit Quarters, which is being developed in partnership with Keepmoat Homes, Coventry City Council and Moat House Community Trust. It is made up of 107 homes which are for private sale through Keepmoat Homes, with many available to buy using the Government backed Help to Buy: Equity Loan Scheme.

Since the project began in 2006 we have demolished over 500 homes and have built over 850 new homes – which includes 275 affordable homes.

We’ve also made huge improvements to existing homes – including an award-winning scheme at the Manor Farm estate, which saw us work with partners to transform 360 homes and the surrounding areas.

Our Director of Regeneration Services Kevin Roach said: “John was a great community figure who did so much for his community in Spirit Quarters.

“It felt right to name a street in his honour and memory.

“We are sure that people in the community will think of John when they walk down the street and his family will feel so proud of him.”

Charlotte Goode, Regional Managing Director at Keepmoat Homes in the West Midlands, added: “We’re thrilled to have named one of the roads at the Spirit Quarters development after John Barrett. He was a key community figure and very much deserves the accolade.

“Work on this exciting new phase at Spirit Quarters development is well under way and is due to be complete in summer 2021.” 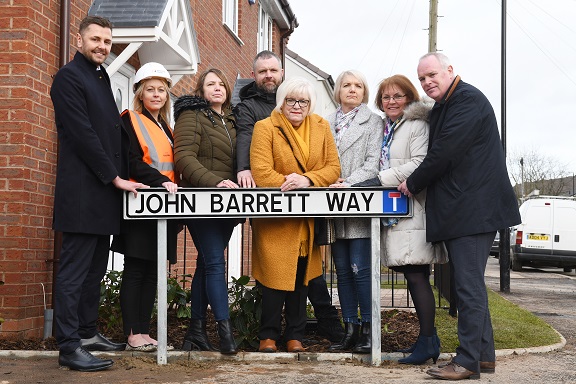