We hold our first Wellbeing Week for Gateway residents

Residents living at the Gateway have taken part in our first ever Wellbeing Week for residents.

Gateway is our primary facility for homeless people in Coventry and houses people from all backgrounds.

People volunteered their talents, including staff across our organisation, so that residents could take part in workshops and focus on wellbeing.

Some of the classes that were held included cooking classes, money advice, Irish dancing, a gym induction, cake decorating, Reiki, yoga and bingo.

Our Housing Support Manager, Gail Cooper, said: “The week has been so well received and residents really enjoyed taking part in different events.

“There were several highlights throughout the week, we all loved the Irish Dancing which was held by Gateway resident Brendan – everyone had a laugh and it was good exercise too.

“Residents were also treated to a make up session with Zahra Somji. She gave them their own make up so they were able to use the tips they’d learnt and practice in their own time.

“Wasps rugby players also opened the new gym for us, and Programme Manager Tony Marsella gave residents a gym induction which were really beneficial for them.

“We also opened our new Working Wardrobe at the Gateway, the residents’ faces when they walked in and started trying on the clothes was lovely. I’ll never forget that moment.

“Thank you to everyone who helped with the week by holding sessions, donating items or volunteering time – we are so grateful.”

Gateway resident, Gabriel Chivesa, said he loved the new gym which was opened.

He said: “The new gym is fantastic.

“It’s going to be great to put health and wellbeing front and centre at the Gateway.

“Thanks to Wasps players Tom and Owain for showing us all the equipment. They had some great tips and I think I gave Tom a run for his money on the rowing machine!

“I’m really looking forward to using the gym and getting active from now on.”

Our Accountant – Citizen Treasury Zahra Somji added: “Being at the Gateway for Wellbeing Week was fantastic.

“It was great to hold a LookGood, Feel Good class there which I really feel gave some of the residents a much needed confidence boost.

“They were thrilled with their makeup bags full of goodies at the end of the session so they could really bring what they have learnt to life.

“I can’t recommend getting involved with Citizen Giving enough to staff. It really is very rewarding.” 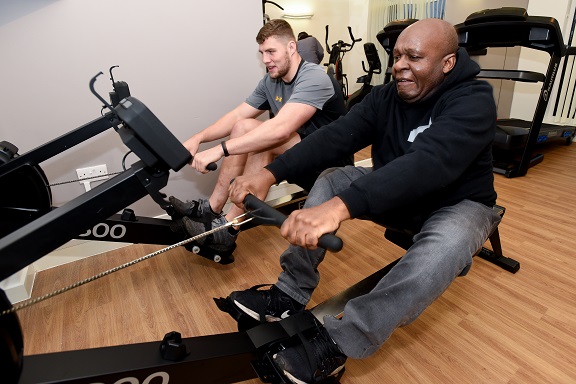