We’re delighted to reveal the kit that Citizen has sponsored as our Neighbourhood Warden George Swain set up a football team in memory of his sons.

Ben and Reece Swain both died at the ages of 27 and 25 respectively from an incredibly rare condition called Cystinosis – a genetic disease which causes crystals to form in the body.

George set up a JustGiving page to cover the costs of setting up Ben Reece Swain United which raised £865 and we agreed kit sponsorship of £650.

On Saturday, the team played in their Citizen kit for the first time.

George said: “Being able to set up the team and secure kit sponsorship has meant the world to me, my family and everyone involved with the team.

“We are so thrilled to finally have a football team playing in memory of Ben and Reece – doing what both boys loved. It’s amazing!

“We will all wear the kit with pride and will play the game in the way the boys strived to do with passion and respect.”

The team played against Bluepool Football Club at the New Irish Centre in Birmingham and won 8 – 2.

The condition which Ben and Reece had is incredibly rare, with only two or three cases diagnosed in the UK every year – and George says his family is the only one in the world with three people who have the condition. George’s daughter Bettie has also been diagnosed with cystinosis.

Both Ben and Reece were avid fans of Liverpool FC, which is why George set up the football team in their name.

Our Director of Communications Steve Hayes added: “We are so pleased to have helped George set up this team in memory of his sons and we hope they have a successful season!”

George has recruited all the players for the team which will compete in the Birmingham and District League in Division Five this season. 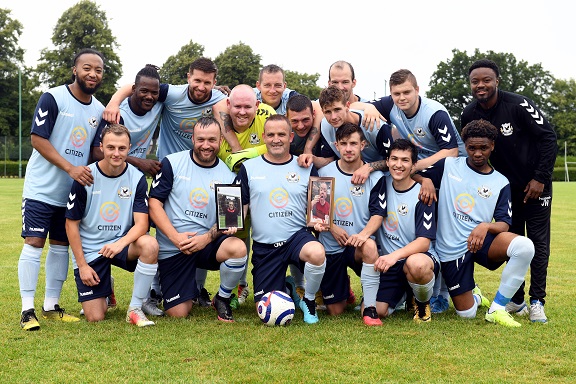