Our pest control team have worked with contractors to safely remove a colony of bees from a chimney in one of our properties in Coventry.

A customer had reported seeing bees over the course of several months after bees were spotted inside the property as well as in the garden.

After discovering the nest, we contacted Delta Pest control to help us to remove the 250 bees safely.

Bees are protected, which is why we called in the experts to help us move them and in turn save them, as we don’t have a license to remove them ourselves.

Delta Pest Control are insured to move the insects and relocate them – they do not kill the bees. They do this by using a machine to suck them from the hive and transport them to their new home.

Scaffolding was needed to access the chimney where the bees were. Access points in the chimney bricks were also made to see the depth of the colony and specialised equipment was used to extract the bees including the Queen in order to transport them to a new colony.

Honeybees live in large families and survive many years as they huddle together and eat the honey themselves. Typically, they have large colonies which range between 10 and 20,000 bees.

This specific colony stretched six foot down into the chimney.

According to the Royal Society of Biology the honeybee is in decline which is worrying as they play a vital role in our eco-system by pollinating our flowers, fruits, and vegetables.

All 250 bees including the queen have been moved to a local beekeeper for re-homing.

Assistant Supervisor for Estates Services Amanda Hart said: “We were called out to a rooftop in the Stoke Heath area of Coventry and we found that several bees had made a chimney their home. We needed to remove them from the chimney, so we contacted Delta Pest Control.

“They arrived at the property and safely removed the bees from the chimney so they could be rehomed in a hive elsewhere.

“We are so pleased that we’ve helped to save the bees by contacting Delta Pest Control and getting them removed in a safe way.”

Our pest control team is made up of Jim Davies, Dave Sexton, Adrian Quinn and Trevor Brand. The team cover communal areas in Coventry, Birmingham and Worcester and are British Pest Control Association registered. 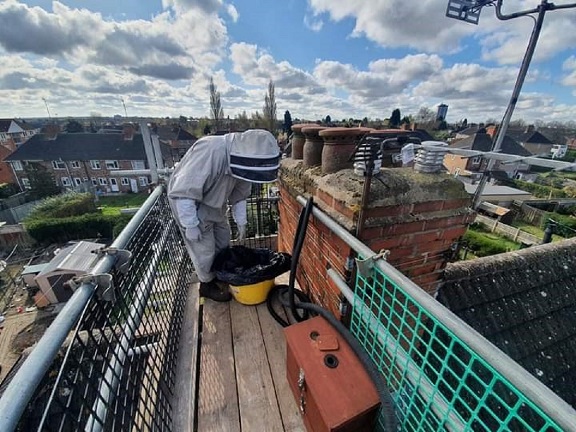