A birthday party has been held for a resident who has lived in Eric Inott House for 25 years.

Eric Inott House is one of our Retirement Living Schemes in Cheylesmore, Coventry.

Edith Brady turned 100 on February 1 and received a birthday card from the Queen.

Edith, who was born in 1920 and has lived through the Second World War, celebrated turning a century with her friends and family.

She said: “I am thrilled that people have turned up for my birthday and have organised this party for me. It’s lovely to have people I care about with me.

“I also received a letter from the Queen too which was wonderful.”

Edith was born in Dundee and worked in a sweet factory while she was a teenager.

She met her husband Charles in 1942. She was sitting on a bus when he asked her out – they were then married six weeks later.

Edith’s husband went off to fight in the Second World War as part of the Black Watch – the Scottish Army and Edith served in the Auxiliary Territorial Service. Their first daughter, Irene, was born in 1944 and their second daughter Edith was born in 1945.

Following the war, work was unavailable in Dundee, so the family moved to Manchester and lived with an uncle until the were able to find a house together.

In 1957 the family moved to Coventry. Edith worked as a cleaner in the local dentist and served meals at the University of Warwick until she retired.

Edith added the secret to a long life is to drink a drop of Drambuie whiskey every night.

Our Retirement Living Manager, Tim Ansell, said: “We have loved celebrating Edith’s 100th birthday and we’re so pleased she enjoyed her party.

“Thank you to everyone who visited Eric Inott House to celebrate with her.

“We’re very proud of what she has achieved. 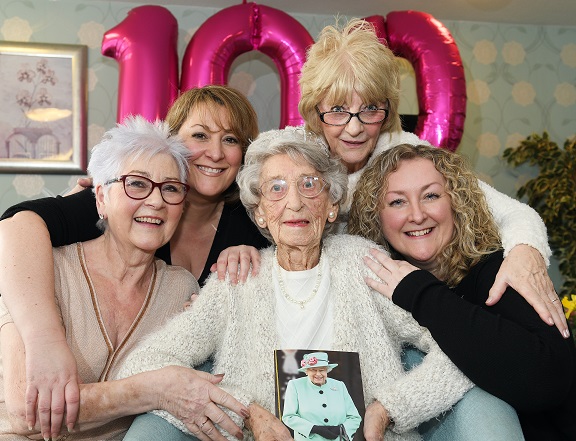